Memories from the Coalfields

A project that uncovers the day to day history of Coalville and North West Leicestershire in the 20th Century by exploring a cache of oral history recordings from the late 1980s and early 1990s.

North West Leicestershire Voices is a project run by Mantle Arts, a community arts company based in Coalville, Leicestershire. The company started in the 1980s and was originally the Mantle Oral History Project. However there is very little evidence left of that period of the company’s work, apart from a box of sixteen cassette tapes in a cupboard at the Mantle Arts building.

The tapes were recorded in the mid 1980s to the early 1990s and were interviews with local people, sharing their memories of life in the district. The earliest memories were from the first world war period and they covered all sorts of things from school and childhood memories, work in the mines and quarries, women’s lives, the impact of war, cinema, and what life was like for a servant in one of the big houses in the area. They were a fascinating social record but there was no information about who these people were. Some of the tapes didn’t even have the person’s name on them.

In 2019 Mantle Arts successfully applied to the National Lottery Heritage Fund for a grant to preserve the tapes, which were vulnerable to the general wear and tear of age, and also to mechanical damage whenever they were played. The funding also supported a range of activities that would make the recordings accessible to the public, set them in context, and utilise them in a range of creative ways. The third aspect of the project was to enable Mantle Arts to start a new collection of oral history recordings that would complement the originals and explore the second half of the twentieth century.

The Covid 19 pandemic meant that the project lasted longer than was expected, and some aspects of it had to be changed. This website was one of these changes, designed to give online access to the project, when people couldn’t experience it ‘live’, and also to provide a lasting record of the work.

The elements of the project are:

1. Preservation of the tapes.

The tapes were sent to Greatbear in Bristol, a company which conserves audio material for museums and archives. They digitised all sixteen cassettes, and undertook a sensitive clean up of the audio to make them easier to listen to, without losing their essential analogue quality.

Mantle Arts commissioned East Midlands based writer Andy Barrett to create a series of booklets that would interpret the oral histories for a modern audience. So far we have published three, focused on work, childhood and war in North West Leicestershire. Each of them includes a CD with a selection of extracts from the interviews. They are available here . A fourth booklet on the history of the cinema in the district will be released later in 2021.

A series of commissions were offered to designers, makers and artists. The brief was to create exhibits inspired by some aspect of the recordings. Each exhibit had to either incorporate the audio in some way or include means for the viewer to access it while they were looking at the exhibit.

The original intention was to have the exhibits on show, one after the other, during the life of the project. The Covid pandemic meant that this was impossible and in the end all four will be on show at the same time, in autumn 2021, in locations across Coalville.

Andy Barrett was also commissioned to write a podcast series. ‘Voices from the Coalfields’ is available here and from other podcast providers such as Spotify. The six episodes aim to set the recordings in their historical context. They cover childhood, cinema, culture, hierarchy, mining and war, and consist of a mixture of original audio, commentary and readings, punctuated by period music sourced from out of copyright 78rpm recordings. They were recorded by a community cast of local people from North West Leicestershire, and children from All Saint’s School in Coalville.

Mantle Arts intended to take a workshop programme into local primary schools. The pandemic meant that visiting schools was impractical. Instead we created an education pack based around oral history, aiming to equip young people with the skills to conduct their own interviews in order to assemble a school oral history archive, linked to the local component of the History National Curriculum.

6.  New Oral History recordings.
The final component of the project is to create a new series of oral history recordings. The existing tapes are mainly about the first half of the twentieth century in the area. This second tranche of recordings aims to fill in the second half of the twentieth century, a period that saw the miner’s strike and the closing of the pits, as well as many other changes.

Mantle Arts will offer a training course for volunteer interviewers, who will then interview local people, preserving their memories for the future. 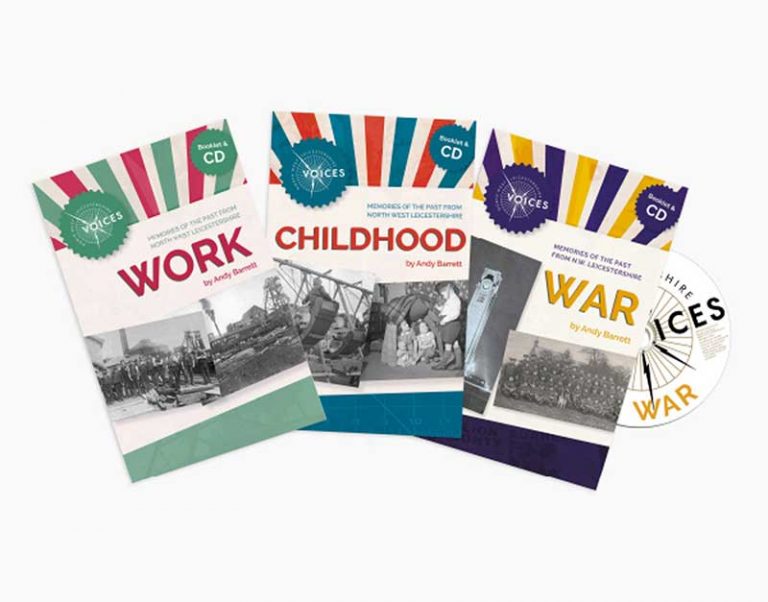 This series of booklets focuses on different aspects of the oral histories: war, childhood and work. Written by East Midlands writer Andy Barrett, the booklets set the recordings in their historical context. Each 16 page booklet comes with a CD of selected audio from the oral histories.
More information and buy booklets

Bringing back voices of the past – and recording voices for the future.

Coalville based community arts organisation, Mantle Arts, has launched a new project bringing people’s memories of the past to life and collecting new oral histories of the region for the future.

The East Midlands Oral History Archive for access to documents and information from the Mantle Oral History Project. The Coalville Heritage Society for the use of photographs from their collection in the booklets and videos. National Lottery players for their part in making this project possible.